How InEvent & Santander created a digital experience at the largest corporate event in the Americas. 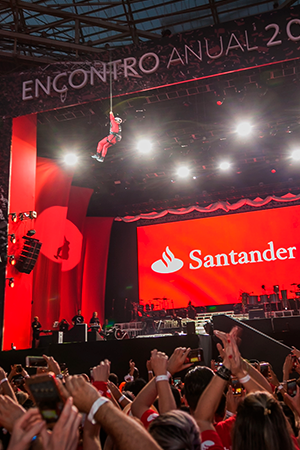 With over 40,000 attendees, InEvent supported Santander with accreditation, interaction, engagement and communication technologies on the largest corporate event in Latin America's history.

Santander Annual Meeting took place on December 2, 2017 at the Allianz Parque stadium. InEvent and Santander teams worked together for more than three months to have excellence at its entire digital experience.

It was an unforgettable year-end party for the employees of one of the largest financial conglomerates in the world.

'Exceeded expectations, very well organized, and the care and attention with the attendees were excellent' - Andre Luis de Queiroz Rangel, who attended the event.

In a closed and exclusive corporate event for thousands of Santander employees, it was essential to have agility, security and control throughout the operation. As an internal Santander event, it was necessary to monitor and track each one of the 40,000 attendees individually. Tracking employee times of entry into the event was essential.

Layoffs and hires needed to be synchronized with the attendees database. Revoking access to former employees and adding new ones on the eve of the event, fast, simple and without harming the attendee's experience, was an important problem to solve.

Tickets generated in the mobile app had to be unique and non-transferable: tickets couldn't be shared with other people with screenshots or borrowed mobile phones.

Communication before / during / after event

To ensure each of the 40.000 attendees had their individual digital ticket available on their mobile phones, upon arrival at the stadium, it was necessary to create an effective communication strategy between the organization of the event and the attendees. A low adoption of the event's app would cause extensive queues, ranging from hundreds to thousand of hours.

Ready for the unexpected

It was imperative to be prepared for unexpected (or unwanted) events. The QR code ticket had to be generated days before of the event, since there was a possibility of lacking carrier signal or wifi. It was also necessary to certify the entry of people without phones due to events such as theft, loss or simply for those who weren't in possession of their phones.

The complete platform for all your events